Collectible statueThe third member of the Batman family to join kotobukiya’s new ikemen series is the Batman intellectual sidekick, red Robin!
The ikemen series takes popular American comic book characters and reimagines them in the Japanese “ikemen,” or “handsome Man” style using original concept art by the illustrator ricken, who is known for her DC Comics work.
The third ikemen to join the lineup is batman’s third sidekick, the red Robin Tim Drake! the high level of care taken in the sculpting of times youthful and toned form makes this ikemen a must for all red Robin fans, and the subtle details of his eye-catching red costume are expertly recreated with a stunning paint job. The statue comes with an interchangeable head, allowing you to display Tim with our without his mask!
Additionally, the 1st edition of the statue will come with a bonus face Part allowing you to display Tim with a more serious expression that provides a nice contrast with the original lighthearted smile on the default face Part.
Following up red Robin as the Fourth entry in the ikemen series is damian Robin! collect all of the different Generations of Robin and display them side by side to fully evoke the unique dynamic of the Batman family!
The “serious face” Part will only be included with the 1st edition of the product and will not be included in later reproductions. 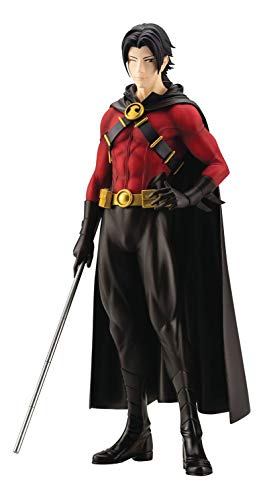